how good was your onahole ?
Forum rules
Locked
8 posts • Page 1 of 1

Hello I have been using Japanese onaholes for almost two years now, I got hooked on Magic Eyes products early on, started with a Cocolo (very nice), then got a Moe Body (beautiful but tore it to pieces), Poco Pen (cock bully), Monster Wet Kiwami (fits me nice, durable)
Then the genius of Magic Eyes release the Physical Relationship!
A 7.5Kg full torso that in my opinion is the best made, best feeling, most lifelike onahole I have ever had.
The construction is very good, had the usual smell right out of the box but didnt take long to dissapate.
I was really worried about it having only 100mm vaginal & 105mm anal depths because I'm almost twice that long but it hasn't been a problem yet with almost three weeks of continuous use! (not exaggerating) so far it hasn't done anything bad, it actually went from feeling good to OMFG good.
The vaginal and anal canals both have a very unique feel, and the real big plus I give it, is like the Kiwami, it doesn't have the tendency to push me out if I lose erection (I'm not a young guy anymore).
But the one thing that was surprising was the fact that there is two seperate urethane foam cores, one in the main body like shown in the photos, but it also has a seperate one that mimics a pelvic bone.
Both are independent of each other so with very slight hand manipulation with it on top of you it can really make some sexy movements! (This is an error on Magic Eyes part for not addressing this capability)
Of course with anything with a foam core there is the danger of the foam core getting saturated with lube/body fluids rendering it useless, well, with again three weeks of continuous use including a moderately rough session with both me and the wife (I have a super one BTW) it has had no real damage. The cavitys are single layer with a radius on the entrances to resist tearing and separating.
It only has suffered very minor separation of the skin and foam core at the very bottom of the hips ( I mean minor)
The only other thing it did that didn't like at first was that the coloring on the nipples, vagina and anus washed off after only two baths. (I think the flannel sheets rubbed it of as well) but I was able to redo it (nipples only) very nicely with the wife's makeup to actually look even more realistic.
It's also big enough to fit in a XXS camisole which makes it really fun.
The only complaint my wife made is that the sound it makes when slapping the ass due to having a foam core isn't very realistic (I could care less)
Bottom line, I consider this to be a professional grade masturbator. Lol!
This is obviously Magic Eyes flagship item, I can't wait to see what major thing they do next! 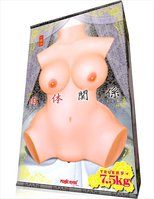 Wow that's for sure an impressive hip
Top

I just noticed that this item resembles the SexFlesh Giving Gwen. Very similar on how the Monster Wet Kiwami was like the Virgin Love.
Top

Ok, update on this, it lasted for almost four months of regular use, a few days ago it breached into the foam core, it all the sudden felt super good going really deep then, yikes! Not good at all! Kinda like screwing a dish sponge.
Anyway didn't bother me that much because I knew I was going to be able to not only fix it but make even better.
Which I did.
After a thorough cleaning and drying, I pushed back the foam to just a tad deeper, then with a cleanser bottle with it's top and bottom cut off to make a tube I inserted it into the opening.
I then (with my modified soldering iron) melted the bottom around the edge of the tube to flow it down into the newly formed foam.
Let it cool, and removed the tube to leave a vacuum bulb formed at the bottom.
Super nice!

Again, I realize that this is no longer a review for it is now a mod, but I just finished redoing my repair and this time I completely remade the whole inside very smooth with soft ripples, it is now like fucking an angel! I have no other words to describe it! I just felt compelled to share this.
Top

Hi there, i myself am debating wether i should get this torso or not.

I currently already own a Meiki Maria onahole and a Meiki Extreme Pleasure Hip. And i'm loving those.

Now my question is, are u willing to post some pics of the torso? I want to see how "big" or "small" it actually looks like in real life.

Yes it's true all of the sellers have the measurements in the info, but i don't know what to expect of that.